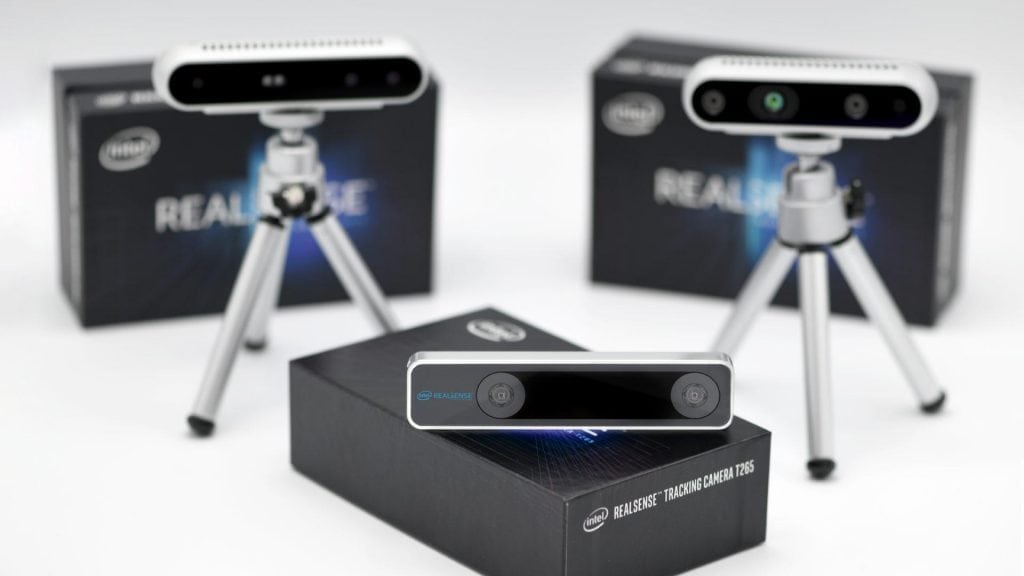 Which Intel RealSense device is right for you? (Updated June 2020)

Whether you are brand new to depth and tracking hardware, or an experienced professional, it can still be challenging to determine which of the many Intel RealSense Products we have available are right for your project. In this post, we’re going to discuss the Intel RealSense depth cameras SR305, D415, D435 and D435i, as well as the Intel RealSense tracking camera T265 and the new LiDAR Camera L515.

Firstly, what is depth good for? What does tracking mean? Depth cameras are cameras which can see not only the 2D details of a scene but can calculate how far away from the camera every pixel is. Stereoscopic cameras like the D400 series take two images from the two sensors on the camera, which have slightly different points of view and compares them. The shift between the same points in both images can be used to determine depth. LiDAR cameras like the L515 shine a laser light around the scene and measure how long it takes for that light to be reflected back to the camera. A coded light camera like the SR305 uses something that falls between the two methods, by projecting patterned light and then evaluating how the patterns deform over time.

When you have these depth images, you can use them for many different purposes. 3D scanning is a popular application, along with skeletal and gesture tracking, measurement, volumetric capture, VR and AR, as well as many uses in robotics and drones.

When we talk about our tracking camera on the other hand, we are talking about a camera that can track its own position and movement in space. While depth cameras can be used to track objects and people in front of the camera, tracking cameras like the T265 are used to track anything they are attached to with a high degree of precision. This could be something like an augmented reality headset, an autonomous drone, or autonomous robot.

Starting with the stereo depth cameras, let’s look at what’s the same between models. Physically, the first three stereo depth cameras (D415, D435, D435i) are about the same size (within millimeters). The D455 is larger in size to accommodate a greater distance between the sensors, or baseline, of 95mm. They all use the same vision processor to provide RGB-D data over USB 3.1, and they have the same maximum depth resolution of 1280 x 720. See the entire comparison chart at the end of the post for specific measurements. One key advantage of stereo depth cameras is that they perform equally well both indoors and outdoors – although you should avoid situations where the sun is pointing directly at the camera lenses.

The D415 and the D435
There are two main differences between these two models—field of view (FOV) and shutter type. The D435i is identical to the D435 in every respect, with the addition of an inertial measurement unit or IMU, so for all other features, you can assume it is the same as the D435.

What does this mean in terms of the camera’s performance? Because the FOV is larger for the Intel RealSense D435 depth camera, you’ll notice less granularity when looking at a specific portion of the image.

These pictures show a magnified and exaggerated view of what each camera’s sensors see:

Looking at the same size area on the pictures, notice the Intel RealSense D415 has a higher pixel density, which means it’s more accurate for any given area than the Intel RealSense D435 at the same points. At the same resolution, the D415 has more pixels per-degree, since it has the same number of pixels in a narrower field of view. While this may not matter in some cases, such as object avoidance or people detection, when accuracy is the number one consideration, for example in 3D scanning, the D415 will provide a better, more accurate scan.  In short, the D415 is more than twice as accurate as the D435.

Simple rolling shutter animation – each square is a pixel, yellow indicates that pixel has been captured.

Global shutter cameras operate differently in that they snapshot the whole scene in a single frame, so every pixel is captured simultaneously.

In practice, because rolling shutter cameras capture an image in sections slightly divided by time, it can lead to odd image artifacts when something in the scene is moving rapidly – for example. In the image below, the propeller blades are distorted because by the time the imaging sensor has reached a different part of the image, the propeller has moved slightly. 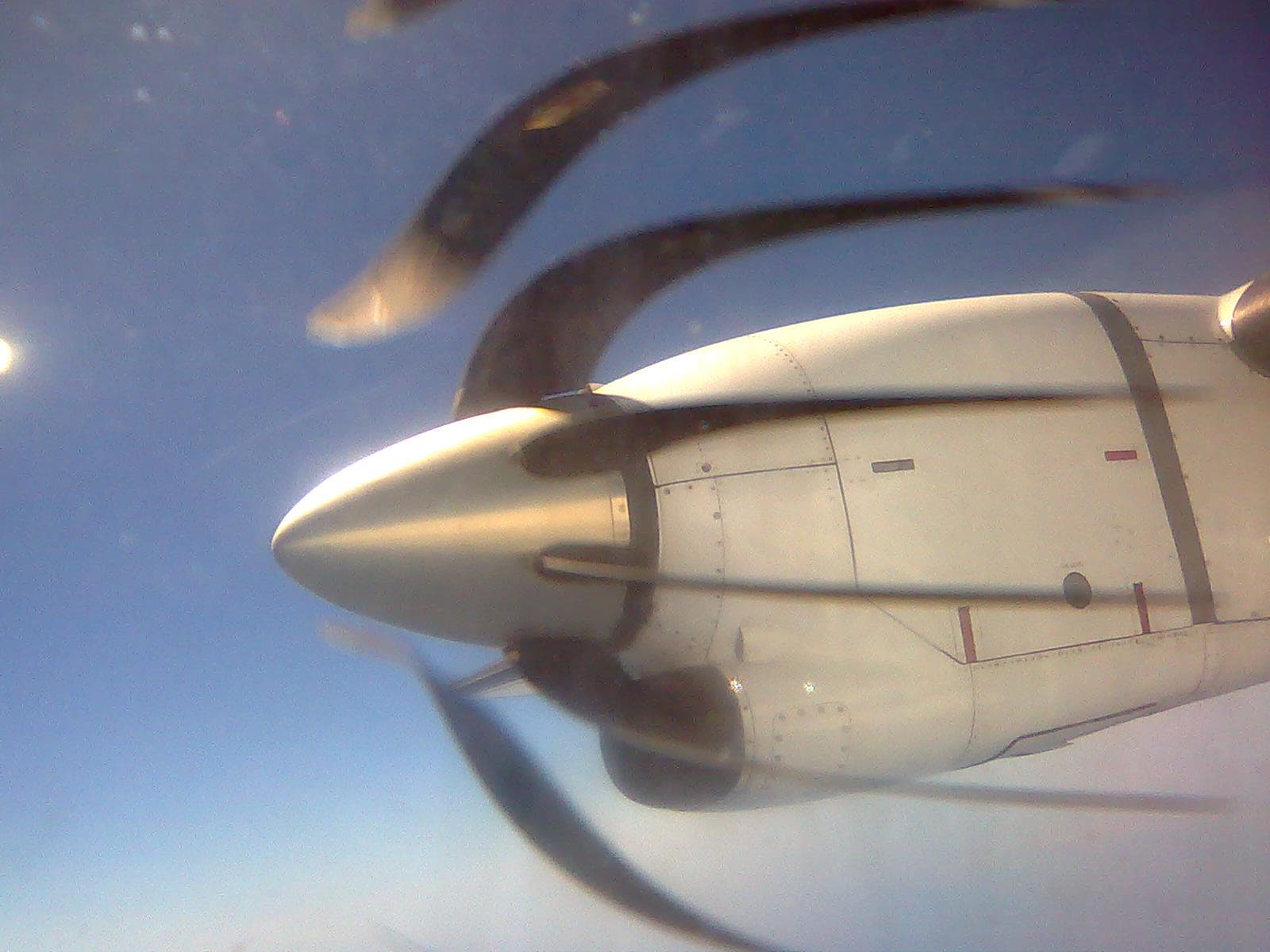 The wider FOV of the Intel RealSense D435 depth camera makes it better for use cases like robotics and drone navigation. The larger FOV results in more time to react to obstacles, plus the global shutter provides better performance if you’re capturing high-speed motion by preventing blurring of the depth image.

The Intel RealSense Depth Camera D455
The D455 is the latest camera to join the stereo depth family. As previously mentioned, the D455 extends the distance between the depth sensors to 95 mm which improves the depth (Z) error* to less than 2% at 4 m. The D455 improves on the design of the D435i with several changes. The wider baseline provides better accuracy at the same range of the D415/D435/D435i.

The D455 also integrates an IMU, like the D435i, to allow your application to refine its depth awareness in any situation where the camera moves. The D455 is powered via a USB 3.1 connection and has a similar power consumption to the D435i.

The Intel RealSense D435 camera is based on the Intel RealSense D430 module with an attached, but separate, RGB camera. The depth algorithm is based on precise placements of sensors, so not having them fixed on the same stiffener may make calibration between depth and RGB problematic. However, users of previous-generation cameras said they really wanted the flexibility to choose their own RGB sensors, and so the D435 was born, and while it is more challenging to precisely calibrate color and depth data together using this camera, it is still possible.

The SR305 is also a depth camera, but with a somewhat different technology. The SR305 uses patterned light to determine depth within the scene. It is ideal for very short range applications under 1 meter, indoors. Within those constraints, it provides solid and affordable depth quality.

As with the D415, this camera utilizes rolling shutter technology. It has a field of view of 69°±3° x 54°±2° and will provide up to 640×480 resolution depth images at 60fps. As with the D415 and D435 models, this camera has an integrated RGB sensor, allowing you to capture both depth and color information.

While LiDAR technology is vastly different from stereo or coded light depth technologies, the important factor all of these camera models share is that they output point clouds with depth information, as well as color information from their embedded RGB cameras. The main difference between the technologies is their ideal operating parameters, along with some differences in how accurate the depth information is in different situations. In the case of the LiDAR Camera L515, it is designed for use in indoor, controlled lighting situations. The ideal range for the L515 is from 0.2 to 9m, and over that distance, it maintains the same level of accuracy, where in the case of stereo cameras, the error rate increases with distance. One of the major features the L515 offers is an impressive edge fidelity – objects are very distinct from their background, and edge lines are clear with minimal noise. It also takes depth images very rapidly, leading to very minimal motion blur when recording moving objects. 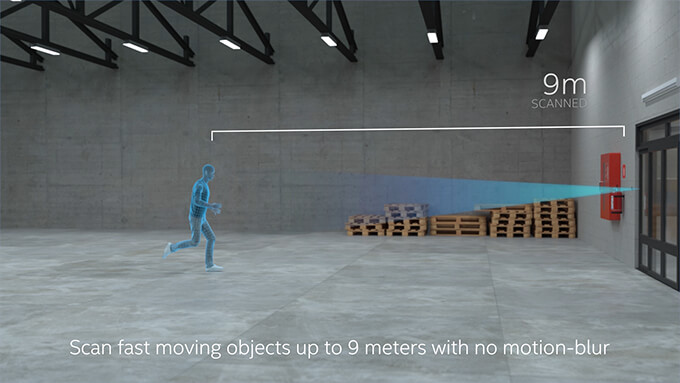 When comparing LiDAR to the stereo depth cameras, LiDAR can sometimes face challenges with direct, bright light, that may overwhelm the intensity of the laser emitted from the camera, or conversely, can occasionally have issues with very dark materials that absorb the emitted light – this is not a flaw of the camera technology, but rather a function of the physics of materials. It’s important when trying to choose the camera that is right for you, to consider what the most important features to you are – whether that is range, operating environment, edge fidelity, or the kind of objects you might be attempting to track or measure.

All the stereo depth cameras work both indoors and outdoors. The Intel RealSense Depth Camera SR305 performs well in very short range indoor products, and the Intel RealSense LiDAR Camera L515 performs best indoors at ranges up to 9m, ideal for applications where high accuracy is the number one consideration.

The D435i, as we mentioned above, is identical to the D435, but with the addition of an inertial measurement unit. The IMU allows movement of the device to be measured, synced with the depth data. This means for a handheld 3D scanning application, for example, as the user moves around an object or person, successive depth frames can be matched together with the movement of the camera for improved scan quality.

The T265 also contains an IMU, but in addition, uses two fisheye cameras and our own proprietary algorithms to track its own position in space with a high degree of accuracy. The T265 is not a depth camera and does not provide depth data. It can be paired with one of the D400 series cameras for applications where you might want high accuracy tracking paired with high quality depth data.

It is possible to run similar algorithms for SLAM (simultaneous localization and mapping) using the D435i – although these will necessarily run on the host device you have the D435i attached to, where the T265 algorithms run on the camera itself. For some applications, this will be sufficient tracking accuracy. If tracking accuracy is extremely important though, or the camera is expected to do large movements such as a fast rotation through many degrees, the T265 will be the best solution.

For all of the cameras above, regardless of which one you choose, since they all use the same open source Intel® RealSense™ SDK 2.0, you can easily write code that is compatible should you choose to switch to a different device at a later date – this will even include later generations of cameras and other new devices, giving you the confidence that whichever Intel RealSense device you choose today, everything you build will still work tomorrow and for years to come.