There are a number of reasons for wanting to combine multiple depth cameras for simultaneous live capture of scenes. For one, arranging depth sensors in an inward-facing configuration will allow for the simultaneous capture of both the front and back of objects, so that the real-time, whole surface volumes of objects can be captured. This 3D recording can be used, for example, for Virtual- or Augmented-Reality “teleportation” and teleconferencing. Alternatively, arranging depth sensors in an outward-facing configuration will create a depth sensor system that has a much wider field-of-view (FOV), and can be used to capture both forward and backward facing depth. This composite FOV configuration is desirable for autonomous robots, drones and vehicles, as well as for security systems that need to continuously analyze a wide surrounding area.

From a technology perspective, these and many more configurations are permissible for the Intel® RealSense™ D4xx series depth cameras because they do not suffer from any significant cross-talk when the depth sensors overlap in field-of-view, and they can all be hardware synchronized to capture at identical times and frame rates. In this paper, we look at all the factors that need to be considered when connecting up many Intel RealSense 3D Cameras, as well as answering the question: “How many cameras can I connect?” 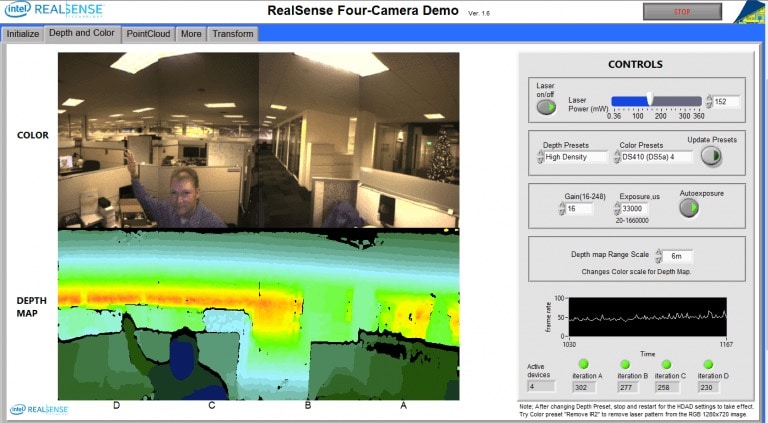 These are the steps we will cover to have your multiple depth cameras up and running:

Download the white paper to read the full guide.