There is a newer version available here.

What’s the same? Physically, the two depth cameras are about the same size (within millimeters). Both use the same vision processor to provide RGB-D data over USB 3, and they have the same maximum depth resolution of 1280 x 720. See the entire comparison chart at the end of the post for specific measurements.

There are two main differences between the two models—field of view (FOV) and shutter type.

The wider FOV of the Intel RealSense D435 depth camera makes it better for use cases like robotics and drones trying to navigate. The larger FOV results in more time to react to obstacles, plus the global shutter provides better performance if you’re capturing high-speed motion by preventing blurring of the depth image or shooting in low-light situations.

The Intel RealSense D435 camera is based on the Intel RealSense D430 module with an attached, but separate, RGB camera. The depth algorithm is based on precise placements of sensors, so not having them fixed on the same stiffener may make calibration between depth and RGB problematic. However, users of previous-generation cameras said they really wanted the flexibility of choosing their own RGB cameras.

What does this mean in terms of the camera’s performance? Because the FOV is larger for the Intel RealSense D435 depth camera, you’ll notice less granularity when looking at a specific portion of the image. Stereoscopic cameras take two images from the two sensors on the camera, which have slightly different points of view, and compare them. The shift between the same points in both images can be used to determine depth.

These pictures show a magnified and exaggerated view of what each camera’s sensors see. 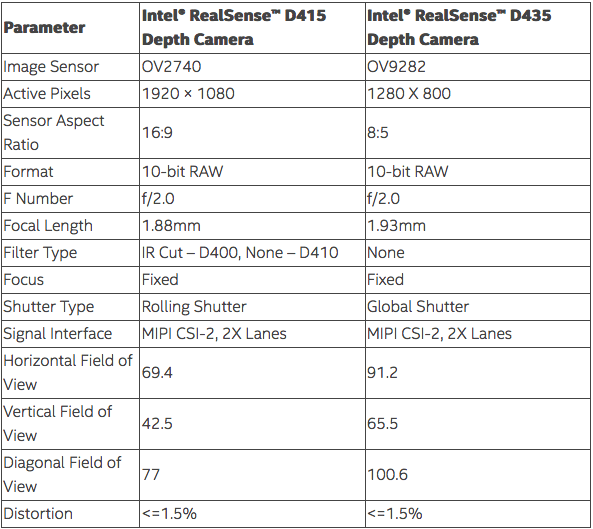