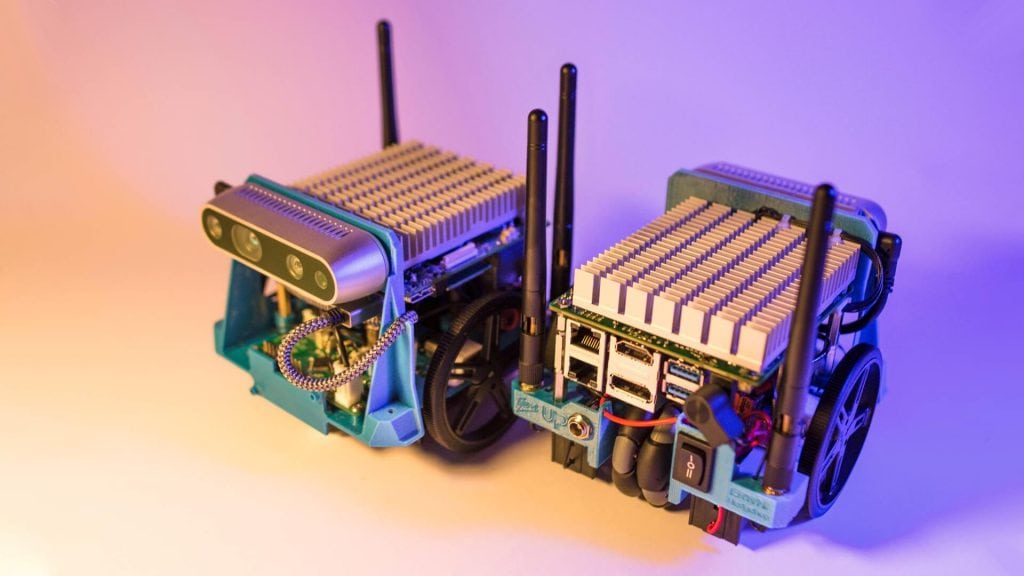 If you have paid any attention at all to the technological advancements in the last decade, one thing is clear; robots are here to stay and will increasingly become a part of our daily lives. You will see more robots being used for tasks that are too dangerous for humans such as nuclear site cleanup or disposal, being used to help fight fires while reducing the danger to human firefighters and more. Robots are also increasingly being used for repetitive or physically demanding tasks, freeing up workers for more complex and creative work. As a developer or engineer, if you want to become part of this growing market, it can often seem challenging to get started with robotics. There are many different aspects to robotic development, from relatively simple challenges like giving the robot the ability to move, to complex problems like autonomous navigation and SLAM. Once you have those problems solved, you can start to tackle the purpose of the robot – what task is it designed to do? How do you complete specific actions in a chaotic and ever-changing world?

If your goal for 2020 is to build your first robot, a great place to start would be the ERWHI Hedgehog – an open source hardware and software project designed and built by Giovanni Bruno. The project started when he joined the University of Naples Federico II in Naples, Italy to study automation engineering, and has grown with him as he continues his studies there. The first version of the robot was fairly simple – a robot that would run until it found a red ball. He named it “ERWHI” – Eyed Robot With Human Interaction. Later on, he also needed to simulate and test some algorithms about navigation, so he created a new version of the robot with the Intel® RealSense™ R200 camera. The robots are designed to be small – specifically to fit in a backpack for easy train or bus travel as Giovanni commutes between home and his university. 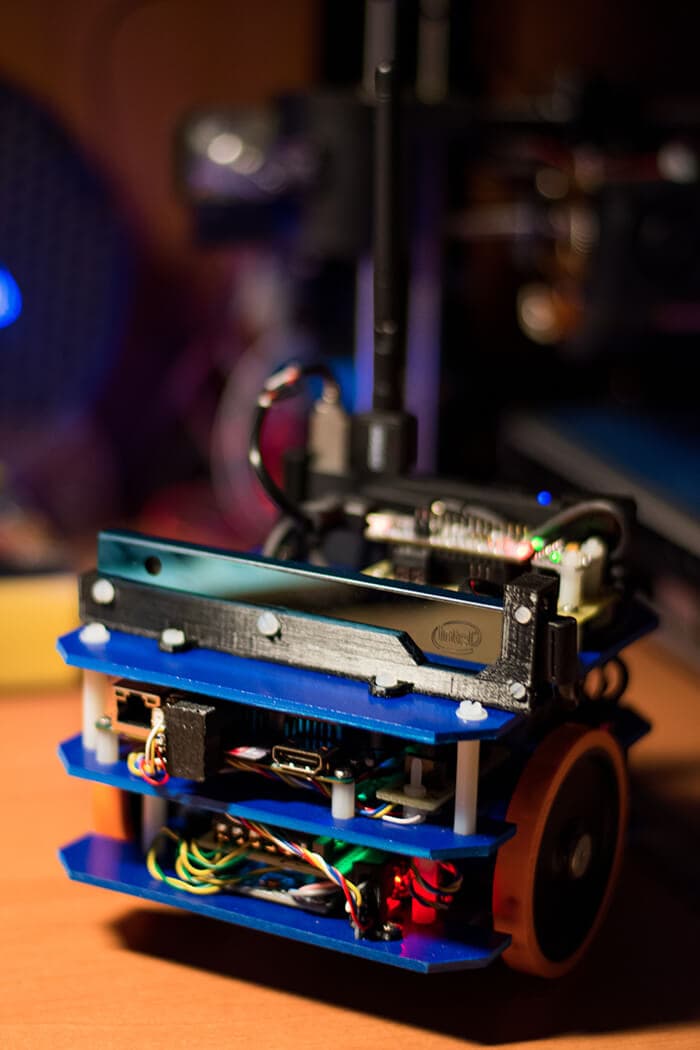 A later version of the ERWHI became the basis for the Aaeon UP Robomaker kit when Giovanni attended the Maker Faire in Rome, 2017 and met the Aaeon team – the ERWHI×UP version of the robot used the Intel RealSense ZR300 camera paired with the UP Squared main board. With Aaeon’s support, Giovanni created a reference robot, an open design for people who need to develop a robot in a short period of time. In 2019 Aaeon released the UP Squared RoboMaker Developer Kit for AWS RoboMaker, which includes a number of the ERWHI Hedgehog main components – the UP Squared board, the Intel RealSense Depth camera D435 and AI Core X, along with Giovanni’s software. 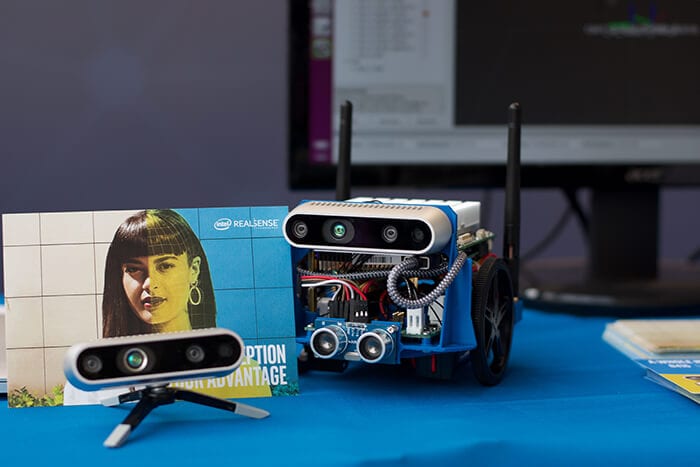 The ERWHI Hedgehog with the Intel RealSense Depth Camera D435

The ERWHI Hedgehog design is based around the Intel RealSense depth camera D435, with support also included to mount the D435i, the version of the camera which includes an IMU. In Giovanni’s words “Intel RealSense is at the base of the robot as a fundamental part of the robot – 3D SLAM implementation needs something like a depth camera or a stereo camera. The robot also fuses different data to evaluate odometry, so visual odometry estimation is computed from the Intel RealSense images. From a hardware point of view, D435 seems to be the smallest device that offers RGBD streams at full HD resolution using global shutter. Since the ERWHI Hedgehog’s footprint is 120mm by 120mm, the D435 was the best choice at 90 mm x 25 mm x 25 mm.

Check out this recent video of the ERWHI Hedgehog in the Neapolitan Subway.

The Hedgehog also includes the AI Core X, a mini PCIe module which features the Intel® Movidius™ Myriad™ X VPU. Together with a ROS package Giovanni wrote called ros_openvino that allows the analysis of the RGBD stream. This package allows you to easily obtain the position in space and the occupancy of a trained object/person/animal. At the moment, this utilizes the mobilenet-ssd.

The future evolution of ERWHI Hedgehog

Currently, Giovanni is working on integrating the Intel RealSense Tracking Camera T265. Those users who choose this route will be able to select which visual odometry system the robot uses, and by using the T265, developers will be able to free up resources from the on-board computer for other functions, instead of the current heavy usage with the D435 based visual odometry.

Other future changes include moving the software to ROS Melodic Morenia and Ubuntu 18.04, and a ROS2 porting that will be a major software upgrade. On the hardware side, Giovanni is working to simplify the number of materials needed, to make it easier for people to build the robot, for example by making all the mechanical parts 3D printable.

Finally, Giovanni would also like to see swarms of ERWHI working together, so future updates might include support for smart swarming.

Ready to build your first robot? Head to the main repository for the project here. You can also check out the facebook page for the project, as well as the main website for ERWHI. To follow Giovanni on social media, you can find him everywhere under the handle @br1johhny. Have fun building your first autonomous robot! 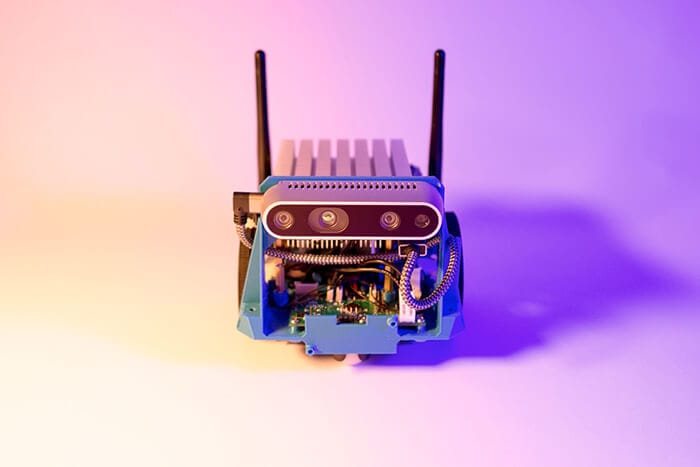